The film tells the story of classical singing against the background of black emancipation in politics and society, a story ranging from the first successes of the bass Paul Robeson, who throughout his life regarded his voice as an instrument of liberation, to the young singing pupils of the Harlem School of Arts, who identify themselves with their origins in rejuvenated pride. We hear the great African American singers, their opera company directors and producers talk about their views and experiences. Historical and contemporary film extracts and specially shot film sequences demonstrate the richness and variety of black singing. The film also tries to give an answer to the the question: Are we really colourdeaf? 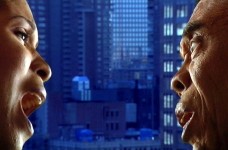 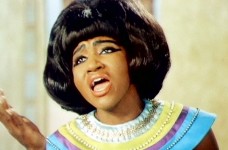 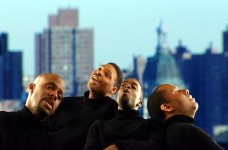 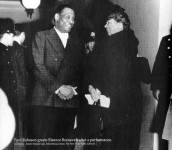 Everybody knows, or should know, the story of Marian Anderson: Denied a 1939 engagement by the Daughters of the Revolution, the great black contralto took her concert out of the Lincoln Memorial at the urging of Eleanor Roosevelt and created a performance far more memorable than whatever was sung to the grand ladies of the DAR. at Constitution Hall.
Operatic though that incident might have been in plot, it was not entirely so musically, unless "My Country Tis of Thee" has been incarnated as an aria in some yet-to-be- discoverted work. Regardless, Anderson is linked indelibly with opera, and her story, along with those of the black artists who followed her, are chronicled in Great Performances "Aida´s Brothers and Sisters: Black voices in Opera" (...)
Anderson finally did grace the stage of the Met in 1953 to become its first black singer and helped to end American apartheid a year before the Supreme Court`s decision in Brown vs. Board of Education. Like Jackie Robinson, who broke Major League Baseball`s color barrier six years earlier, Anderson soon was followed by other African-Americans. Two weeks after her debut, Robert McFerrin became the forst black male to sing at the Met. Unlike Anderson, he was offered a three-year contract, sparking a career that if not notalbe for its own achievements would have been respected for spawning that of Robert McFerrin the younger, or Bobby as he is known to fans of "Don`t Worry, Be Happy" fare.
Indeed, it is the voices of black forebears that inform the contribution of Leontyne Price, Simon Estes and Barbara Hendricks, whose entrances on opera`s main stage have long buried any notion that blacks do not belong there or that the form would be worth following today without them. "The ability to express the suffering of a Mozart aria is something that I learned from singin spirituals," says Hendricks in the 90-minute film. Be that as it may, one should not assume that spiritual singing comes naturally just because the singer is black. "I did learn from Sylvia Lee that my singing of spirituals is terrible!" says diva Martina Arroyo, invoking the master voice coach who preceded Anderson as the Met`s first black staff member.
If there is a sin of omission in the film, it is the absence of any further mention of Lee. A barely 5-foot-tall dynamo. Lee shares the fair skin of her mother, Sylvia Olden, who was offered a Met contract in 1913 and would have eclipsed Anderson by four decades - if she had chosen to pass for white. Yet the film does include others who never graced the opera stage but contributed greatly to it. Most notable is Paul Robeson, who had no problem singing spirituals or any other kind of music. His influence also defines dignity - in changing , for instance, the last lines of "Old Man River" from "I`m tired of living, but fraid of dyin" to "I must keep fighting until I´m dyin".
That spirit lives on in the decades since, in which blacks have played every nontraditional role - from George Shirley`s Pinkerton to Arroyo`s Cio-Cio San in Puccini`s "Madama Butterfly" - as well as those relegated to them. "I did my first Sport'n` Life (from "Porgy and Bess") in 1998. At this point, I felt I could afford to do it, " Shirley says with a chuckle.
One drawback: Interviews in the German-produced show are framed by wannabe-arty travelogue footage that´s seemingly inspired by Dieter´s "Schprockets" school of producing. Ignore it. close your eyes and listen, which, at heart, is the point.

Aida`s Brothers and Sisters: Black Voices in Opera is an absorbing look, with fabulous archival footage, at the struggle of African-American singers to achieve such stages as the Metropolitan, from Marian Anderson and Paul Robeson to Leontyne Price and Simon Estes, from Martina Arroyo and Bobby McFerrin to Jessye Norman, Grace Bumbry, Shirley Verrett, and George Shirley. They all tell horror stories, usually in good humor. Don`t miss Edward Said, taking time off from the Middle East to speak of music.

"Aida`s Brothers and Sisters" is a documentary about African-American singers in opera that airs tonight. (...)
Flawed by the consequences of low budget and lofty pretensions, it is nevertheless worth wathching for sime wonderful views of Marian Anderson, Leontyne Price, Shirley Verrett, Jessye Norman, Reri Grist, and Paul Robeson in full cry and by some spectacular displays of ego, eccentricity, personality, and intelligence in the inteview segments.
Apparently Price, Norman, and Kathleen Battle, who goes unmentioned, declined to participate in this film by Jan Schmidt-Garre and Marieke Schroeder; their absence weakens it. Longtime Boston opera lovers will be happy to see how often Verrett appears to comment with sharply focused observations, and there is a tantalizing glimpse of her as Saint-Saens`s Dalila. Anne Brown, who created Bess in "Porgy and Bess," speaks briefly and brightly, and we see her in a film of "Summertime"; others speak very disparagingly of Gershwin`s opera. Other divas interviewed include Betty Allen, Martina Arroyo, Grace Bumbry (who discusses shades of Max Factor stage makeup with great enthusiasm), Grist (as precise and elegant in speech as in song), Barbara Hendricks, and Camilla Williams (in the most outrageous get-up of all). Tenors George Shirley and Thomas Young, along with baritone Simon Estes, eloquently state the problems that African-American men face in opera. Paul Robeson Jr. and Bobby McFerrin (son of Robert McFerrin, the first African-American man to sing at the Met) deputize for their fathers. There is cultural commentary from stage director Goetz Friedrich, Edward Said, who is inclined to spout off; and Rosalyn M. Story, who wrote the book about this subject, "And So I Sing," offers perspective and shading.
The film has manneristic touches. Most of the interviews occupy only a portion of the screem immage; the rest of it is taken up with desolate urban landscapes that pass by in the style of a 19th- century panorama, although what this has to do with opera or indeed with most of these cosmopolitan singers is unclear. Members of Opera Ebony also appear to link eposodes by performing scenes in arty stagings that do not conceal the lack of orchestral accompaniment, or accompaniment of any kind, Geraldine McMillian, who sang Aida for the Boston Lyric Opera this season, is one of them.
Controversial subjects are not shirked - "Is there such a thing as a black voice?" - "Do male African-American singers pose a sexual threat onstage that troubles an audience?" The film opens and closes with images of Anderson, singing both at the historic Lincoln Memorial concert in 1939 and at President John F. Kennedy`s inauguration - 22 years, but, the film makes clear, not enough, then or now; there`s still a long road to travel.

"If it doesn´t bother you that Zinka Milanov really isn`t Ethiopian when she sings Aida, if it doesn`t bother you that Mario Del Monaco isn´t a Moor when he sings, Othello ... if you´re not bothered by that, then why would you be bothered by the fact that I am African American, singing the role of a French nobleman?"
Tenor George Shirley poses this thought-provoking question in a Great Performances special, "Aida´s Brothers and Sisters: Black Voices in Opera". (...)
Fittingly, this enlighening program begins with Marian Anderson, whose groudbreaking contributions paved the way for today`s operatic stars such as Kathleen Battle, Denyce Graves, Jessye Norman and Simon Estes, who are celebrated worldwide. "She was our mother, in effect, of every Black singer," said mezzo-soprano Betty Allen. "She was the mother who opened the door for us. She made everything possible, She opened all those doors that had been closed. All the hotel rooms that would become open for us to stay , all the halls that people said we couldn`t sing in. She made things possible for us."
There are also observations from some of our greatest voices, including Shirley Verrett, Anne Brown and Reri Grist. Rosalyn M. Story, whose volume "And So I Sing" is considered the definitive account of African-American divas and their roots. Barbara Hendricks gives testimony to the influence that the "negro" spiritual has on a Black singer´s approach to classical music. Martina Arroyo recalls "shakin in her shoes" when internationally acclaimed African-American vocal coach Sylvia Lee, a Mount Airy resident, coached her in the spirituals, and Paul Robeson, Jr. shared an amusing anecdote about his legendary father.
In a most intriguing, telling moment, the great Grace Bumbry, who is being interviewed by a German reporter at the 1961 Bayreuth Festival, answers his question in fluent German.
In addition to breathtaking performances by established stars such as Leontyne Price, Jessye Norman and Simon Estes, we also get to hear, in a particularly inspiring segment, some promising young Black voices, both male and female, as the artistic torch is passed by their ebullient and talented teacher Dianne Randolph.
"Aida`s Brothers and Sisters" is far more than an entertaining episode about the unique history lesson that celebrates our rich and varied heritage.

Aida`s Brothers and Sisters – Black Voices in Opera and Concert

An engaging and thought-provoking history from Jan Schmidt-Garre

Jan Schmidt-Garre has made four films since the 1992the history of black singers overcoming racism and prejudice is mostly told by the singers themselves, Shilrey Verrett, Reri Grist and Grace Bumbry in particular, and if George Shirley and Simon Estes are outnumbered, then Shirley’s rhetorical question offers a pointed explanation: if you’re not bothered by Zinka Milanov singing Aida, why is the idea of him singing a French nobleman still uncomfortable? The film’s tour of the issues such as what makes a black voice allows for a brief excursion on what might make a black opera: the debate over Porgy and Bess is crystallised by Edward Said, for whom it’s "condescending", and Bobby McFerrin, with his praise for Gershwin’s attempt to "understand the black experience". The extracts are too brief to give pleasure in themselves (and it’s a shame they are unsubtitled), except for Marian Anderson singing „Ave Maria“ at Christmas 1939 and Jessye Norman as Strauss’s Ariadne, both lit from within by unshakeable technique and faith in their own powers of communication. Norman and Leontyne Price have probably been the most visible represenatives of black voices in opera, and the film perhaps loses a little authority without their personal witness. In compensation, we see Price dedicationg her appearance in 1982 at the convention of the ballgowned and beribboned Daughters of the American Revolution to the memory of Anderson, whom the convention had infamously shunned in 1939. The film ends on a downbeat, With Paul Robeson’s eloquent fury at being forbidden to travel outside the US for his communist sympathies abd „Anti-American“ activities. By declining invitations to star at the great opera houses, Robeson chose not to be a standard-bearer for Black participation of White culture-a role left to Price in particular-but became th efulcrum to unite issues of racial, class and cultural equality. The path to those temples is rockier now than it was in the age of the Black diva. Back in 1999, Verrett hopes that „the Metropolitan can get back to the place that it was". Whatever they tried hasn’t worked: Nicole Cabell ist he sole singer of African-American ancestry scheduled to take a lead role at either the Met or Chicago Lyric opera in the 2009-10 season.

Distributed with the support of Media II 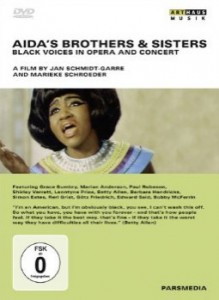