A parable on the laws of art based on a short story by Ilse Aichinger: A man wakes up. He is bound. The bonds leave him room to move. He performs in a circus. A woman tries to match his movements in the bonds; she fails to seduce him. The bound man finds a wolf in the forest. In his bonds he is equivalent to the wolf. He brings it to the circus. They perform in the circus. The woman cuts the bonds. The wolf almost kills the man. The woman shoots the wolf. The man goes away.


Co-produced by SF DRS, ORF, ZDF/3sat and NRK
Supported by the Bavarian Film Funds FFF
Developed and distributed with the support of the MEDIA Programme of the European Union 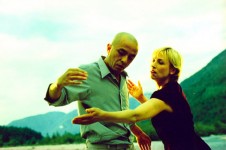 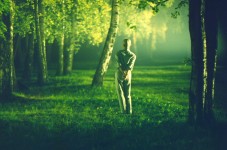 Based on a story by Ilse Aichinger 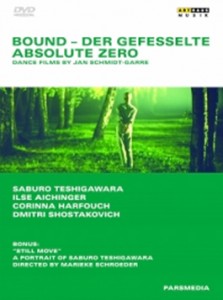 His chances all lay in the amount of free play in the cord. He propped his elbows up on the ground to test it. As soon as it tightened he stopped, and tried it again more cautiously. If he had been able to reach the branches over his head he'd have used them to pull himself up, but he couldn't reach them.

Nobody knew how hard it was for the circus owner to keep the man with them or how often the man said he had had enough and wanted to move on. Later, he stopped talking about leaving. When the owner's wife brought him his food by the river and asked him how long he would stay, he did not answer. She thought he had gotten used to - not being tied up - but not forgetting for a moment that he was tied up, and that that was all the cord would permit. She asked if it didn't seem ludicrous to him to remain tied up, but he responded: no, he didn't. A circus had such a large entourage, elephants, tigers, clowns - why not a man who was bound?

There were times he told her he felt as if he weren't tied up at all. She responded that he wouldn't ever have to feel bound if he would simply be willing to get rid of the cord. That was always an option, he replied.

He felt a slight elation at having lost the deadly advantage of free limbs that causes men to lose. The freedom he felt was having to adapt every twist and turn to the cord that bound him - it was the freedom of wild flowers swaying in the evening breeze.