Films › Breath of the Gods

Breath of the Gods

Modern yoga, that is, the form practiced daily by tens of millions of people around the world, goes back directly to the god Shiva according to Indian tradition. At the same time, however, modern yoga originated in the early 20th century, a creation of Indian savant T. Krishnamacharya (1888-1989). That story is far less known and is what this film is all about.

Krishnamacharya’s life and teachings are seen through the eyes of the director Jan Schmidt-Garre on his search for authentic yoga. His journey leads him from the legendary students and relatives of Krishnamacharya’s to the source of modern yoga, at the palace of the Maharaja of Mysore. From Pattabhi Jois Jan learns the “Sun salutation”, from Iyengar the “King of Asanas”, the headstand, and finally Sribhashyam reveals to him his father’s secret “Life Saving Yoga Session”.

A feature-length documentary including rare historical footage as well as lavish reenactments. 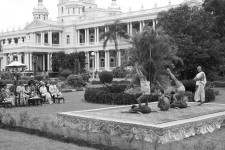 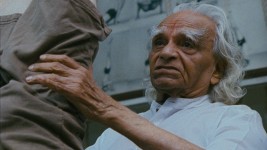 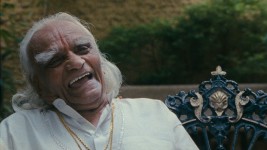 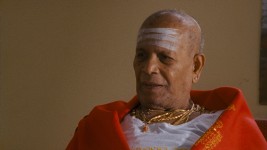 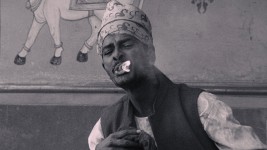 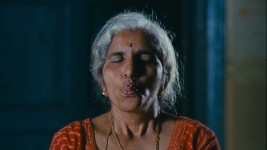 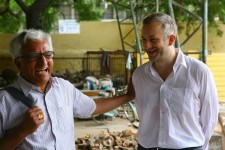 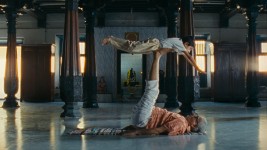 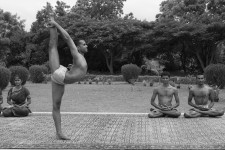 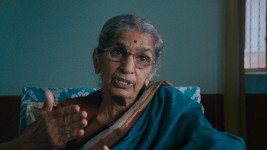 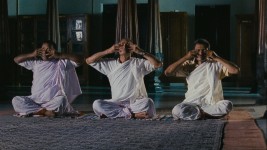 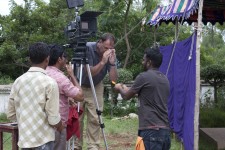 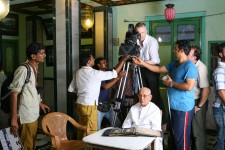 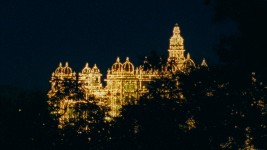 Claudius Seidl, Frankfurter Allgemeine Sonntagszeitung, 8.1.12
“Mr. Schmidt-Garre, whose previous films dealt mostly with the performing arts, travelled to India in search of the origins of modern Yoga. He found real human beings (and gods) and a practise capable of humouring itself. This alone is good enough a reason to take them entirely seriously. We learn that Yoga is circus as well as religious service as well as the art to stand on one’s head and see the world the right way around. A beautiful film.“

Wolfgang Hamdorf, Filmdienst 1/2012
“A complex approach to Krishnamacharya, his life and spiritual philosophy, captivating for its endeavour to comprehend and for its astute editing. Above and beyond the subject of Yoga the film draws a picture of modern India rich in facets and nuances.“

Susanne Hermanski, Süddeutsche Zeitung, 5.1.12
“Mr. Schmidt-Garre portraits Krishnamacharya, who almost reached a 100 years of age and influenced all currently known Yoga styles, in an elegant mesh of different cinematic means: he discovered impressive historical archival footage from the thirties showing Krishnamacharya practicing his asanas, his positions – a young ascetic whose body control verges on magic. He conducted numerous interviews with Krishnamacharyas sons and daughters and with his most important students: Iyengar and Pattabhi Jois - the latter, well in his nineties, passing away in the course of the filming period. Mr. Schmidt-Garre’s observation of these men teaching their students glides by in ruminant sequences. Intermittently he has himself filmed during his own lessons, as he struggles with the head-stand for instance to old Iyengar’s relentless instructions. Especially alluring are the sequences where Mr. Schmidt-Garre reenacts historical India, snake charmers and all, including scenes from the court of Krishnaraja Wodeyar IV.“

Münchner Merkur, 5./6.1.12
“With a subjective approach Mr. Schmidt-Garre intelligently handles the overwhelming copiousness of opinions and material. On his research trip across India the filmmaker from Munich encounters the aged Yoga gurus and their disciples. He avoids every clichéed image of India, does not pander to European expectations in his depiction. Krishnamacharya, the „father of Yoga“ from the twenties who can be seen on historical footage practicing his asanas, would be overjoyed at this detailed and precisely worked film.“

Philipp Bühler, Berliner Zeitung, 5.1.12
“The jittery black-and-white images of half-naked yogis are of course fascinating. But ultimately stunning is the fact that Mr. Schmidt-Garre was actually able to meet with the protagonists of these ancient images. Hearing these legendary masters talk lets most prejudices dissipate. Stretching of the entire body all the way to the little toe – what may sound esoteric in Berlin Yoga lofts sounds very tangible coming from B. K. S. Iyengar’s mouth. But when he says that in the moment of perfect mental control you become holy, he himself can’t help laughing.“

Stuttgarter Zeitung, 5.1.12
“Despite its interest in the teachings and development of Yoga this film – unlike so many others – is not a search for meaning without any critical distance. Mr. Schmidt-Garre deliberates about whether Yoga is ancient tradition or novel invention and lets us see: competitiveness is no stranger even to the great masters.“

Stefanie Wilkes, Spirit Yoga
“Director Jan Schmidt-Garre has retrieved a treasure with his work. Not least because he himself explores Yoga with his means as a director and a student of Yoga. It is downright touching how he practices with high concentration a sun salutation under the guidance of the venerable Pattabhi Jois. With this genius trick he lures his audience onto the Yoga mat and onto his journey, beginners and experienced yogis alike. Once a philosophy graduate himself he worked for five solid years on this film project produced in India and each of the 104 minutes is bliss.“

Annette Hahn, Kunst + Film, 1.1.12
“The reenacted scenes are reminiscent of the silent films of the 1920s; They are accompanied expressively by classical music. Herefore the director resorts to works of the late romantic period, for instance the aria “Hindu Song“ from Rimski-Korsakows opera “Sadko“ of 1898, which makes an alienating impression at first. After all in the West we associate Indian music more with sounds of the Sitar. But this late romantic music brings to life the European longing for Indian exoticism. In this way Mr. Schmidt-Garre brilliantly broaches the distance that lies between a phenomenon of Indian culture and his own perspective of it.“

Angelika Taschen, publisher
“The title alone is .... It’s amazing how you managed to put this subject to film in such a contemporary, effortless and relaxed way. Breathtaking images, India as it was and as it is, everything’s alive. It’s a historical document of a giant movement, and you made it just at the right time. Thank you for this significant contribution to my passion, which is Yoga.“

Wolfgang Hamdorf, Filmdienst 1/2012
“Trees rustling in the wind. Nothing is left of the old village in South India. Here T. Krishnamacharya, the father of modern Yoga, was born in 1890. Director Jan Schmidt-Garre follows the traces in search of the man from Muchukunte, who died in 1989. Krishnamacharya’s life as well as the encounters with his students and his children are one recurrent motive, the other is a wonderful musical theme: the Hindu Song by Russian composer Nikolai Rimsky-Korsakov from 1897. It represents here the Western nostalgia for Eastern wisdom. The third motive is the development of Yoga teaching on the subcontinent, from the time of the British Empire all the way to modern day India. The documentary film narrates with a moving camera, then again with calm, steadily shot interviews, but also with much thrilling archival footage. It shows eye witnesses, friends, students, family members in the contexts of their own lives and conveys, as though in passing, much of the social and cultural changes of the Indian subcontinent.

The question about the origin of modern Yoga keeps recurring, about the faithfulness to tradition and about innovation over the last 100 years. Does modern Yoga derive from 5000 years old texts or was it formed in the 20th century? It soon becomes clear that Yoga is neither a cryptic secret doctrine nor an easy relaxing program. Almost physically clear it becomes when the director, failing at the lotus position, is encouraged to try over and again by Pattabhi Jois, the strict student of Krishnamacharya’s. „Yoga is always possible“ the old master says. The positions should be held up to 30 minutes. The layman’s muscles tense up at the mere sight of a lotus position or a head stand. But despite all the effort involved Yoga is as popular today as jogging and comes with the additional spiritual benefit of a „mergence“ of mind and body. “In my youth“, says Krishnamacharya’s brother-in-law B. K. S. Iyengar, who with his sometimes serious, sometimes cheerful expression reminds of the indiophile philosopher Schopenhauer, “people in India knew nothing about Yoga. It was something for charlatans and morons.“ Yoga’s position in society was comparable to circus artistry; for the refined classes Yoga was rather a spiritual-philosophical approach than physical activity. Only as late as 1927 Yoga experienced a sort of renaissance.

The film presents Krishnamacharya, demonstrating his sequences to the Maharaja of Mysore, who in 1934 set up a Yoga school for him, where Krishnamacharya developed a new, faster and more intense Yoga with new positions, “asanas“. The Yoga master had six children; the younger ones speak of the rigid daily schedule and the deep concentration their father demanded from them. They say that knowledge is wealth, a hidden treasure that must be retrieved. To the backdrop of the world of old magical India, portrayed in the film with reenacted images of snake charmers, fakirs and Sanskrit scholars, the fact that Krishnamacharya was capable of stopping his heart beat for a full two minutes no longer appears all that unnatural. His brother-in-law Iyengar, however, speaks not uncritically of the master and portrays him as an ambivalent character, often driving him over the edge of his capacities. After India attained independence the Yoga shala of the Maharaja was shut down. Krishnamacharya henceforth worked therapeutically with individual coaching. The last images of him on faded colour film show the old guru with a white beard while eating.

“Breath of the Gods“ is no representative of spiritual wellness cinema offering European post-materialists life support with far-eastern recipes and exotic mysticism. Instead it is a true investigation and honest endeavour to comprehend a spiritual philosophy. This film is a kind of “Buena Vista Social Club“ of modern Yoga because beside the historical footage of Krishnamacharya it portrays also his students Pattabhi Jois (who died during the filming period) and the legendary Iyengar, the master’s brother-in-law. Jan Schmidt-Garre does not claim a false insider perspective, neither does he speak in images of regressive European exoticism. When, at the end, he faces the statue of Narasimha, the breathing God, the initial question of the origin of modern Yoga may not be answered, yet the not entirely explicable image of modern India is closer to completion.“

"The meaning of Yoga is concentration. Concentration to the extent we can go." Alamelu