“At once the theatre transforms itself into a sun”, a stage direction by Mozart reads. Gazing at the sun can be beautiful but what would it be like to actually see it from inside? The 360° camera promises such a peek.

“360° Figaro” is a music film shot in virtual reality: an opera scene, for the first time conceived and staged exclusively for this new medium, live performed both vocally and instrumentally, recorded by a binaural sound recording technique. A series of scenes—coherent in itself—has been shot from the beginning of Act II of Mozart’s Le nozze di Figaro. Instead of having a conventional centrifugal angle like in an arena, our point of view is a centripetal one. The viewer is placed right in the centre of the performance which is staged exclusively for him. 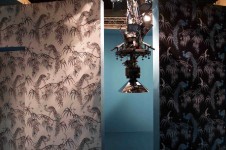 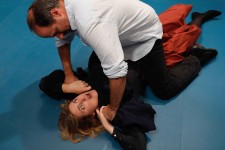 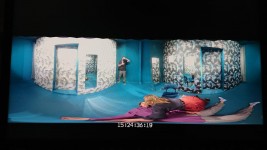 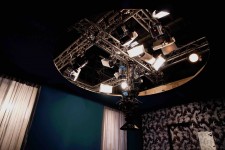 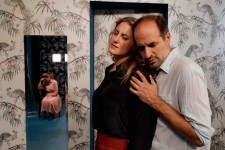 The 360° medium can lead to a completely new kind of art experience in which the media of film and theatre complement one another in very specific ways: The camera does not move from its central location of action since the very position itself is a key advantage along with the challenge of having no cuts.  The camera’s limited filmic means are albeit supplemented by classical theatrical devices: action, sets and lighting. The action fills the total continuum, from the central point to the potentially endless horizon–effectively limited by the camera’s resolution. Scenery and lighting can produce a multiplicity of spaces, which separate, emerge and amalgamate. The space becomes dark, narrow and claustrophobic, until a rapid transformation surprisingly opens up and widens it. Doors can release axes of light: one side can be narrowly structured, whereas the other opens a depth dimension. It is precisely here that the old theatrical devices of Baroque opera and Fairground Theatre show themselves as well-suited partners to the modern technology as provided by the 360° camera.

We set in to the story with the erotically charged scene in which Rosina and Susanna decide to dress up the young teenager Cherubino—played by a woman—as a girl and are in awe and smitten by the result of his androgynous beauty. Sparks begin to ignite between the boy and Rosina. But then there’s a knock on the door—it’s Rosina’s husband . In a hurry they try to hide Cherubino in the dressing room, Susanna rushes to leave the room, Rosina remains alone and Almaviva enters. When Cherubino—a bundle of nerves—clumsily knocks over a chair, Almaviva is alarmed out of jealousy and decides to break the dressing room door. He hurries to fetch some tools and forces his wife to accompany him, then cleverly locks all doors. An instant after they are gone, Susanna reappears, rescues the unhappy Cherubino who out of lack of escape possibilities, jumps off the window. So by the time Rosina and Almaviva return, Susanna has taken Cherubino’s spot in the dressing room. Almaviva urges his wife to tell him the truth. She almost confesses while he attempts to blow up the door—which magically opens and Susanna, elegantly pretending to be utterly surprised, leave Rosina and Almaviva equally exposed and astonished. A contrite Almaviva begs his wife’s forgiveness for having been un­trusting and suspecting.

This is the way God listens to the world

Mozart relentlessly masters to heat up his scenes and situations, they are full of humour and profound knowledge of the deepest human abyss while highly charged with a type of sitcom which is more contemporary and fresh as ever. What Mozart so wonderfully manages in this very ensemble, is beautifully summed up by Peter Shaffer’s Amadeus who let his Mozart proclaim the following: “Would a playwright want to portray this very moment, he would need to recount each and everyone of his thoughts, one by one, on paper. A composer can summarise them all—and yet still make you hear each and every individual thought of thread. I would bet this is the way God listens to the world.”

Reaching out to the future generations of viewers

The art form of opera in its 400 year history has always strived and sought an exchange and communic­ation with new forms of media and realized to reinvent itself in these new forms: opera recordings on vinyl and CD as well cinema, radio and TV broadcasts are examples of this. And just in the similar way, opera will continue to live on in virtual reality. It will create and bring about unexpected new facets and in this way will as well reach a new, young audience.

Olena Tokar, born 1988 in Lugansk, Ucraine. In 2012 she was awarded the first prize at renowned ARD music competition in Munich. She is member of Leipzig opera where she sings Pamina, Papagena, Susanna, Musetta (Bohème), Berta (Barbiere di Sevilla) and Zdenka (Arabella—directed by Jan Schmidt-Garre).