Texts › Is a Celibidachian allowed to love Currentzis?

Is a Celibidachian allowed to love Currentzis?

Film: » Celibidache – You Don’t Want Anything – You Let it Evolve «
Film: » Furtwängler’s Love «

„How was the super crazy Currentzis?“ my friend Christoph asked by e-mail. I had told him that I was going to the premiere of Mozart’s La clemenza di Tito at the Salzburg Festival, conducted by Teodor Currentzis. I hesitated to answer. The fact that I had liked it was kind of embarrassing, especially in front of Christoph. We had both studied with the conductor Sergiu Celibidache, Christoph much more intensively than I did, but I had also become very close to Celibidache because I had made a film about him over almost four years. And I knew, of course, what Celibidache would have shouted in that Titus, every few bars, „Locally thought!“ That was one of the worst judgments. It meant that the musicians had celebrated a beautiful passage without putting it in the context of the whole – and context was all that mattered. Then in the evening I gave myself a jolt. One does have a duty to confess, I thought, and wrote Christoph briefly, „It was great!“

To entrust Currentzis, of all people, with his first opera premiere was a real coup for the new artistic director of the Salzburg Festival, Markus Hinterhäuser, a manifesto. And he engaged Currentzis not with the Vienna Philharmonic, the Festival’s traditional orchestra, but with the Russian orchestra MusicAeterna, which Currentzis had founded thirteen years ago in Novosibirsk as a baroque ensemble and then developed into a major symphony orchestra in the city of Perm. The recordings of Mozart’s Figaro, Così and Don Giovanni that made Currentzis famous in the West were produced in the Perm Opera House. With the Salzburg premiere, he has now arrived in the „royal class,“ as the German newspaper Weltwrote; for Süddeutsche Zeitung, he is currently „radically the best Mozart conductor.“

Why did I find it so difficult to judge, why couldn’t I just write down a superlative, why the dramatic talk of confession? Because the way Currentzis makes music is not only a little different from what Celibidache did, because he does not only play a little faster, sharper, rougher, like many conductors today, but because a paradigm shift is taking place here. In the old paradigm, for which Celibidache is not the only one, of course, but, well: paradigmatic, the unity of the artistic form was the highest goal. A musical phrase is heard, the next one answers it, the proceedings open up again, and again there is a response. One plus one becomes two, two plus two becomes four, and so on until the climax, after which the forces reverse and return to the calm of the beginning, so that the whole process is but a single reaching out and catching up again, a single movement of expansion and compression, a single breath that can extend – say in the slow movement of Bruckner’s Eighth – over an incredible thirty-five minutes. Viewed from the outside, as Celibidache would immediately object, because from the inside, from the experience, there is no temporal duration, all this happens in the now. What Celibidache expressed in the seductive image that the end is already contained in the beginning.

For Celibidache, as for his teacher Furtwängler, this idea was indissolubly linked to tonality. „On the firm foundations of the triad,“ Furtwängler wrote, „the cadence arises in tonal music. Out of the release of tension the tension grows to grasp the multiformity of life and finally – according to the law according to which it started – to return to the starting point, to the so-called tonic. Every great piece of tonal music, therefore, despite all the excitement that can be driven to the limit of human comprehension, exudes a deep and unshakeable tranquillity that permeates everything and everyone like a memory of the majesty of God.“

Now, what does Titus sound like with Currentzis? Rugged, wild, archaic. Utterly strange and new. On a small scale, of course, the complementary phrases also exist with him; a musical person cannot help but feel complementary in this way. But then suddenly there are contrasts of a harshness that can no longer be resolved with the available musical material. Dynamic contrasts from the most extreme pianissimo I have ever heard to the strongest fortissimo. Entrancing caesurae in which the world holds its breath, but also abysses in which it loses itself.

„At the hand of the atonal musician,“ says Furtwängler, and one thinks he is talking about the Salzburg Titus, „one walks as through a dense forest. Along the path, weird and wonderful flowers and plants draw our attention and one does not know oneself where one has come from or where one is going. The listener is gripped by the feeling of being exposed to the power of elemental existence.“ Seventy years ago, Furtwängler was already well aware of the fascination that could emanate from this strange world: „There is admittedly no denying that a certain note has thus been struck in the modern man’s feeling for life.”

According to Thomas S. Kuhn, a new scientific paradigm emerges when the old one is in crisis. Anomalies occur that can only be explained in a makeshift way, and finally, somewhere in the world, „extraordinary research“ begins that leads to the new paradigm. Talk of the crisis of classical music began around the time of Furtwängler’s death, in the 1950s. Today, the average intellectual no longer considers it a lack of education not to know what a liberating experience a coda can be, in which the composer, on the last bars of the piece, with dwindling strength, gains some more time, through small unassuming motions in the musical material. And while the intellectual would be uncomfortable not being able to say anything about the golden ratio or about the form of the sonnet, he does not know how the dominant relates to the tonic – and what that sounds like.

When Teodor Currentzis works out the works of Mozart, Rameau, Tchaikovsky or Shostakovich with a group of friends in the foothills of the Urals, with no time constraints, no obligation to perform, no financial pressure, this can certainly be called „extraordinary research. « » You can’t gather partisans in the capital,“ Currentzis says, „you gather them in other places, somewhere in the woods.“ The new paradigm that emerged from this underground is now conquering the world from Salzburg.

And Currentzis himself is very aware that this is a new paradigm. „Every person,“ he says, „has a Dionysian and an Apollonian side. Classical music has dealt only with the second. The Dionysian is the wild, unadorned side of the subconscious, where its own algebra and geometry rule. It leads to drunkenness and ecstasy when it comes into contact with the outer world. When was the last time you experienced Dionysian ecstasy in a concert hall?“

The musicians of the Apollonian paradigm wanted to convince. Currentzis wants to persuade and overwhelm. To this end, he is willing to use any means, including extra-musical ones. At the beginning of his concerts with the phenomenal MusicAeterna Choir, he completely darkens the hall. A distant chant rises from nowhere. It brightens a bit, and the black-clad Currentzis slowly strides to the podium and takes over. At the end of the intermission of Titus, he mingles with the choir singers and lays flowers of mourning on the stage for the shot emperor Tito. For him, theater and music are one, and significantly, in Titus it is the accompagnati that are particularly gripping: the most impure music of the opera, the recitatives with orchestra, completely committed to action and emotional dynamics, close to stage music – and far from the closed form.

Much is lost, and perhaps one must have inhaled the old paradigm as strongly as Christoph and I did under Celibidache’s influence to feel the farewell so painfully. But a very great deal is also gained: a radically contemporary world that makes one wide awake and drunk at the same time. Currentzis reaches the „modern man“ of whom Furtwängler spoke more directly than almost any other musician today. In 2005, then still in Novosibirsk, English critic Peter Culshaw asked him if he had a mission. „I will save classical music. Give me ten years, and you’ll see!“ 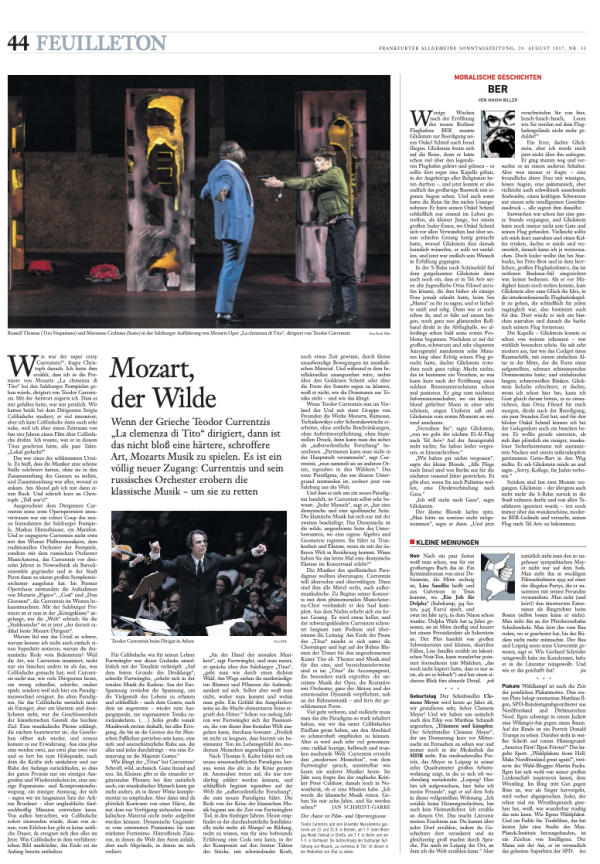 Film: » Celibidache – You Don’t Want Anything – You Let it Evolve «
Film: » Furtwängler’s Love «