When did you decide to reconstruct yoga demonstrations from the 1930s?

I was very attracted by the few black & white photographs of the yoga shala that you find in Krishnamacharya’s first book Yogamakaranda. I saw them first in Norman Sjoman’s book on the Mysore Palace Yoga Tradition which also inspired me a lot. They convey beautifully the atmosphere of this point of departure of modern yoga, with its mix of discipline, devotion and magic. This atmosphere was supposed to become an essential part of my film. As those public demonstrations haven’t been filmed I decided to reconstruct them.

If you only knew those photos how did you know what actually happened in the demonstrations.

There are very few written documents about what happened in Mysore in those days. But we were lucky to find many witnesses whom I interviewed about the demonstrations. First of all Krishnamacharya’s relatives who were part of the demonstrations, especially of those done in other cities of South India in order to propagate Yoga. The oldest daughter Pundarikavalli was born in 1931 and remembered many details. She and her two years younger sister Alamelu are featuring together with her father in the 1938 film which I also used. Krishnamacharya’s wife and her sister Jaya Lakshmi were the first women he taught yoga to. Jaya Lakshmi only died recently and could tell us a lot. They not only took part in demonstrations, they even taught yoga themselves. (By the way this is why Krishnamacharya instructed them: He wasn’t allowed to teach women who were not his relatives. So he used his wife, sister-in-law and daughters as middlewomen to teach the female members of the royal family. The student practiced with his relative, and Krishnamacharya gave instructions sitting behind a curtain. This seems to be the starting point of yoga for women which until then was restricted to men. Amazing if you think of what the world of yoga looks like today, only some 70, 80 years later!) And there were the other students of Krishnamacharya’s who could relate on the demonstrations, basically Pattabhi Jois, BKS Iyengar and Srinivasa Sharma. All these interviews took place before we shot the demonstrations. We actually started shooting with Pattabhi Jois on Guru Purnima of 2007 – without me knowing this – and ended intentionally on Guru Purnima again: With the palace demonstration in 2010.

Where did you find your performers?

Two of the yoga performers – Shiva Kumar and Shyam Narayanan – are asana tournament champions from India, teaching now in Hong Kong. Alex Medin who did the choreography chose and instructed them. The only real Brahmin in this group is Prasad Bathundi, a sanskrit scholar from Mysore. He is the one who does this amazing Buddhasana in the village demonstration. He had only started practising two years before! Maybe because he is a Brahmin to me it’s through his face and eyes that you can look into the deeper meaning of yoga, beyond the circus surface. The two girls are also yoga practitioners from Mysore. It was very important to me to include women in the demonstration because it is so little known that women were doing this. As Maharaja we were recommended a lawyer with striking similarity to Krishnaraja Wadiyar IV. He is of course no professional actor and it took me some time to talk him out of his routines such as twirling his beard! A difficult cast was Krishnamacharya himself. Here we couldn’t just go for outward similarity. He had to be a Brahmin and to breathe yoga and its tradition. So we were lucky to win Alex’ sanskrit professor at the Mysore Sanskrit College for the part: Gangadhara Bhat.

And what about the locations?

It wasn’t easy to find a village that still looked like in the 1930s. We finally decided for one close to Mysore, home of one of our set managers. We had to do a lot of masquerading, hiding telegraph poles etc. The Lalith Mahal Palace is the former summer palace of the Maharaja of Mysore. This was his private residence whereas the big palace in the city served mostly for representational purposes. We couldn’t find out without ambiguity where the historic demonstrations really took place but it could very well have been there.

What we see in the reconstructions are sequences of asanas which remind of Pattabhi Jois’ series.

We filmed two types of demonstrations: One in front of the Maharaja and his entourage which was supposed to present the fruits of the Yoga Shala teachings to its patron. These demonstrations had no particularly didactic purpose. They should impress the audience like a good show. When Krishnamacharya toured villages and small towns in the state of Karnataka the purpose was to propagate yoga. Krishnamacharya would ask a student to do a sequence that had a particular, very difficult and spectacular asana as a climax. He would then talk about the benefits of that asana to the audience. The student had to stay in the asana until Krishnamacharya had finished his speech and then go back to the starting position in reverse order. This is not exactly the same in Pattabhi Jois’s sequences. In his second book Yogasanagalu, Krishnamacharya precisely indicates step by step how to reach every individual asana from standing position as a starting point.

Why don’t you make it clear in your film which parts are reconstructed and which ones are authentic?

Because it would disrupt the flow. I want the audience to really live this world that I’m presenting. When you read subtitles like » re-enactment « this will shift your perception from experiencing to observing. It’s like asking you a question during Shavasana! When I think of Breath of the Gods today, with some distance, I sense an atmosphere. A mood. A world. Streets in South India, piano music, weird marks on old men’s foreheads, black and withe images. And the all-embracing feeling after a yoga class in which you succeeded to synchronize movement and breath. All of this cluttered together in one image. And this is what yoga became for me: a world. No aspect of the world – a world in itself. That I can enter as I enter the worlds of art, food or love. I wish that to some people my film may open this world. 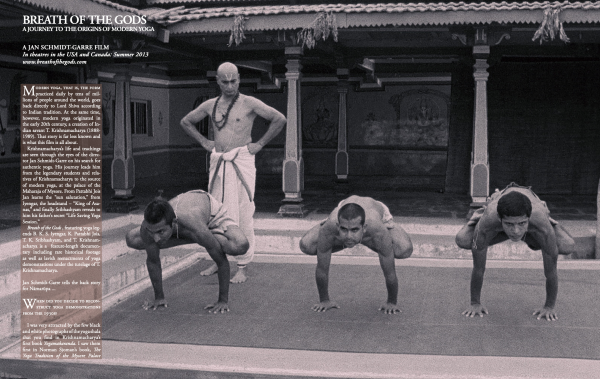