Texts › The Trauma of the Diva – Interview with Ermonela Jaho

The Trauma of the Diva – Interview with Ermonela Jaho

Film: » Fuoco sacro – A Search for the Sacred Fire of Song «

When Ermonela Jaho sings, it is a matter of life and death. This is not only due to the soprano roles such as Madam Butterfly. She tells about it in the film » Fuoco Sacro « and in this conversation 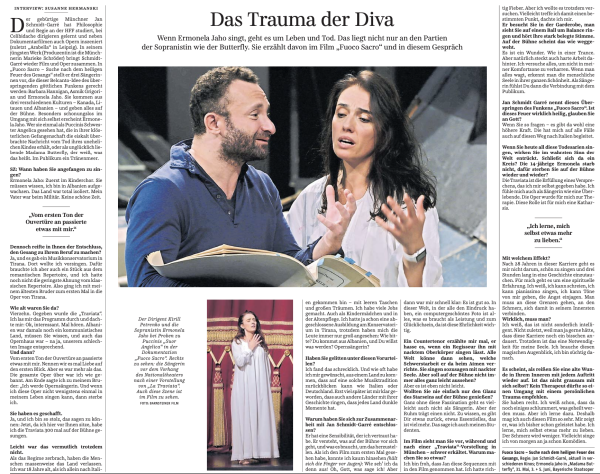 Munich-born Jan Schmidt-Garre studied philosophy and directing at HFF (Munich Film Academy), learned to conduct with Celibidache and, in addition to documentaries, has also directed operas (most recently » Arabella « in Leipzig). In his latest work (produced by Marieke Schroeder from Munich), Schmidt-Garre again brings together film and opera. In » Fuoco Sacro – A Search for the Sacred Fire of Song, « he presents three singers who do justice to this bel canto idea of the overflowing divine spark: Barbara Hannigan, Asmik Grigorian and Ermonela Jaho. They come from three different cultures – Canada, Lithuania and Albania – and give everything on stage. Ermonela Jaho appears particularly unsparing in dealing with herself. Anyone who has seen her as Puccini’s sister Angelica, who receives the icy news of the death of her illegitimate child in her cloistered confinement, or as the unhappily loving Madam Butterfly, knows what that means. A sea of tears in the audience.

When did you start singing?

First in the children’s choir. You have to know, I grew up in Albania. The country was totally isolated. My father was in the military. Not a nice time.

Nevertheless, the decision matured in you to make singing your profession?

Yes, and there was a music conservatory in Tirana. I wanted to audition there. But for that I needed a piece from the romantic repertoire, and I didn’t have the slightest idea of the classical repertoire. So I went to the opera in Tirana for the first time with my oldest brother.

How old were you then?

Fourteen. The production was » Traviata «. I read through the program and thought: Okay, interesting. Let’s hear it. Albania was still a communist country at that time, you know, and the opera house was also – well, according to our bad image.

From the first note of the overture, something happened to me. Let’s call it love at first sight. But it was more than that. I was spellbound throughout the entire opera. At the end I said to my brother, » I’m going to be an opera singer. And if I don’t sing this opera at least once in my life, I’ll die. «

Yes, and I am so proud to be able to say: Now that I’m sitting here in front of you, I’ve sung Traviata 300 times on stage.

When the regime broke down, people left the country en masse. I was 18 years old when I came to Italy alone – with empty pockets and big dreams. I did many jobs. Also as a nanny and in nursing care for the elderly. I had already completed my education at the conservatory in Tirana, yet people always looked at me with a big smile: Excuse me? You come from Albania, and you want to be what? An opera singer?

Did you suffer from these prejudices?

I thought it was terrible. And how often I wished I came from a country that could look back on such a musical tradition as Italy or Germany. It was only much later that I realized that other countries also wrestle with their history, that every country has dark moments.

Why did you decide to work with Jan Schmidt-Garre?

He has a sensitivity that I trusted. He understands what’s going on on stage and what it takes to produce that. When I first saw the film, I could hardly look at the screen (holds her fingers in front of her eyes): What do I look like! Oh, God, what am I saying! But then it quickly became clear to me: it’s a good thing. In this world, where everyone has the impression that a computer-improved photo is all it takes as an achievement and to be happy, this honesty is important.

A countertenor once told me that he hates it when a director lets him sing with his upper body naked. Then the whole world could see what hard work he was doing when breathing. You sing with a naked soul, so to speak. But shouldn’t everything always look easy on stage?

But it is not easy.

Didn’t you ever just want to enjoy the glamour of being a star on stage?

Maybe you can’t be a singer without this fascination. But fame doesn’t carry you. Knowing that singing gives you something back, something essential, that’s much more. I also tell my students that.

In the film, you are seen before, during and after a » Traviata « performance in Munich – with a severe cold. Why do you do something like that?

I’m glad that Jan took these sequences into the film. I had a real fever. But I wanted to try it anyway. Maybe I’ll hit a certain point with it, I thought.

He visits you in the dressing room, we see you struggling for balance on a ball, and we hear your very throaty voice. On stage, that seems to have blown away.

It’s a miracle. Like being in a trance. But of course there is also hard work behind it. I try everything not to stay in my comfort zone. When you dare everything, you realize the human soul in all its beauty. As a singer, you then feel the connection with the audience.

Jan Schmidt Garre calls this sparking over » Fuoco Sacro «. Is this fire really sacred, do you believe in God?

If you ask like that – there is probably a higher power. In any case, it also accompanied me on this path to Italy.

When you sing all these arias of death today, you seem to be literally removed from the world. Does that complete a circle? The 14-year-old Ermonela didn’t die, but you die again and again on stage?

La Traviata is the fulfillment of a promise I made to myself. I also feel like a survivor as a singer. Opera became a therapy for me. This role is a catharsis for me.

After 28 years in this career, for me it’s not about singing beautifully and immersing myself in a story for three hours. For me, it’s about a spiritual experience. I know I can scream, I can sing pianissimo, I can make sounds that are scary. You have to go to those limits, to the pain, to connect with it at your core.

Really, do you have to?

I know that’s not particularly intelligent. Not least because one would like this career to last a bit longer. Still, it’s a necessity for my soul. I need this magic moment, I’m addicted to it.

It seems as if you are tearing open an old wound inside yourself again with every performance. Isn’t that cruel to yourself? No therapist should recommend dealing with personal trauma like that.

You’re right. I do know that there are still some things lying dormant that need to be healed. But I’m learning. That’s why I like this film so much. It shows me what I have already accomplished. I’m learning to love myself a little more. The pain is getting less. Maybe from tomorrow I’ll be singing comedy.

Film: » Fuoco sacro – A Search for the Sacred Fire of Song «