The dramatization of a severe professional and personal crisis in the life of Anton Bruckner, who has to make the most important decision he will ever make: whether to stay in his hometown of Linz as a teacher and organist or go to Vienna to work as a composer. This period of soul-searching makes his later symphonies all the more powerful. 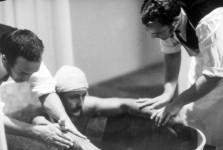 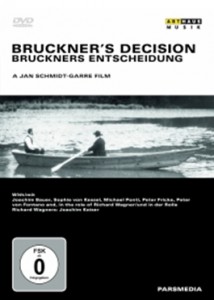 A decision cannot be based on a process of selection but takes place in direct relation to the whole being. A decision effects the being, what it is itself. When the choice of a career is considered a decision, for example, then it is not about whether it is the most "convenient", "promising" or "lucrative" profession among all the "possibilities", but about the profile of being itself. Whoever in this manner is a fisherman (doctor, pilot, blacksmith), is it in reality. He or she thus freely accepts certain limitations with clearly restrictive and at times oppressive effects, but thereby also gives birth to a decisiveness which has a certain force of assertion and conviction as a result.

Whenever a decision arises from a choice, then the stage of action is transformed and another structural model comes into force. If this transformation does not take place, then the choice is reduced to indecision; the decision completely loses the principle of selection without gaining a new, meaningful criterion. To be and act as a whole means to directly experience the whole of one's profile in a single possibility. The possibility thus loses its limitations and its demarcation to other possibilities.

"Different possibilities" no longer exist. Decision involves one single possibility, and that is the whole possibility of existence itself.
Every decisive action also determines its past history, it establishes new meaning and purpose and organizes them in such a manner that it flows out of necessity. Every decisive action shapes its past history, it acts with the same energy toward the past as toward the future; life thus springs from a single point. In this sense, nothing is ever past.
Expressed in the most general terms it can be said that the right decision is that which is a decision. And in fact, upon closer inspection, the situation of decision no longer appears as the presentation of comparable "possibilities", but as the offer to accept a single possibility, everything else is escape or deceit.

It's the Structure which Is the Venture

In "Bruckner's Decision" you attempt to construct a complete portrait of Bruckner from a very small episode in his life.

I have been fascinated by the theme of the existential decision for quite some time, particularly as a central point in the creative process, when it is a matter of using this and no other word in a line, this and no other color - and naturally in the life cycle when a person is challenged to make a decision beyond a given framework of this or that choice, to make a decision about his life as a whole. I was struck by Bruckner's biography, struck that a decision with such an existential significance might have given his life its direction and that it perhaps was even at the basis of the power and decisiveness of his late masterpieces. I thought that this might be the right angle for a film about Bruckner.

Around these years, Bruckner's life took an entirely new direction. All of a sudden, he had the courage to move to the metropolis of Vienna, where he became a full-time composer. He started to write symphonies, a genre with which he was almost entirely unfamiliar, and suddenly, from age 43 onwards, he produced one monumental symphony after the other. To me this decisive step must have been the consequence of an existential decision, with which one is confronted so rarely in life. He had arrived at a point where the alternatives of everyday life were collapsing. "Should I work, go out, write a motet or an organ piece, or meet Maria or Anna?" No: Shall I from now on take my life into my own hands, and decide who I am and will be, yes or no? It is not a question of deciding irrelevant matters, but of saying Yes or No to the only offer which I was made, of "Accepting myself", as Guardini puts it, thus ultimately it is a question of life or death.

Does the film live up to your original intentions and expectations?

Whenever I present the film I am both surprised and pleased to see that the viewers accept its form without questioning it. The film is made up of completely heterogenous material: bathing scenes in the spa of Bad Kreuzen, photos of Mexico, slow motion shots of St. Florian, an alpine Corpus Christi procession, a portrait of Manet. And on top of that, a complicated epistolary novel off-screen, between Bruckner and two fictitious contemporaries. This sounds pretty complicated, but, regardless whether people view the film with disfavour or favour, they never question its structure. And in fact it is the structure which is the real venture!

The structure of the film binds the elements in an organic manner, so that the heterogeneous nature of the material is hardly noticeable.

I am a completely traditional 18th century aesthetician with regard to demanding an inner unity from a work of art. In this sense, the divers elements are thus just more a formal challenge, for they are more difficult to force together. The foreign components should not impress the viewer as an intellectual concept, but they must lead to a direct and immediate experience. You are constantly torn between constructive intentions and the intrinsic dynamic processes of the material and must recognize that you have to work with the given material, with this actor, with this decoration - not with something fictitious or non-existent. And then again when editing: the film is going to be made from the material that you have. Every attempt to graft on an idea that was not realized from the script leads to intellectual kitsch. That can succeed, look at the Canadian film about Glenn Gould.

This structure probably could have taken its final form only during the editing process.

It was very difficult to put the material in its ultimate shape. Usually the material causes problems in the beginning, and then again shortly before the end; the bulk of the work involved is done more or less automatically. With this film, however, each cut was a struggle: two frames forward, two frames back, then revise the structure, and check the balance again. In this way it took us another five months after the rough version before I could watch the film without getting stuck.

Why did you decide to film this material, which is colored so strongly by the Austrian landscape and Baroque architecture, in black and white?

I wanted to recreate the climate of the world from which Bruckner drew the power for his work. I wanted to take the inner perspective rather than view the 19th-century composer's biography from a historian's distant point of view. I was inspired by the small booklets which you can buy in Austrian Baroque Churches and which illustrate the history of the church's architecture with insufficient black-and-white illustrations. To me these booklets, in a direct and sensual manner, convey the atmosphere of the religiousness which was typical of Bruckner's time and lasted perhaps until the beginning of the 20th century. If, in this respect, the film has turned out old-fashioned, I am perfectly satisfied.