A portrait of the Danish artist Olafur Eliasson. The film introduces Eliasson’s work and aesthetic theories as it documents one of his largest exhibitions ever, "Notion Motion" at the Boijmans van Beuningen in Rotterdam. An excursus examines Hans Richter and his abstract film "Rhythm 21" made in 1921.

Since the early 1990s Olafur Eliasson (*1967), who grew up in Copenhagen, has built up an amazing œuvre consisting of rainbows, sunsets, waterfalls, scent walls, mist, shafts of light, and periscopes. His work navigates between natural phenomena and technology. Eliasson’s work makes the spectator aware of his perception; it makes, as it were, the perception tangible.

Supported by the Media Plus Programme of the European Union 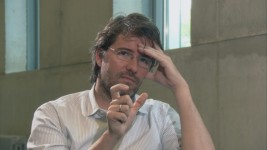 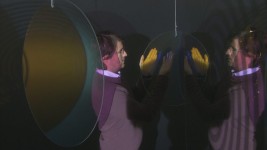 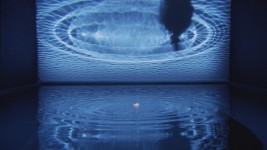 On DVD with Arthaus Musik including a conversation between Olafur Eliasson and Adrian Searle: 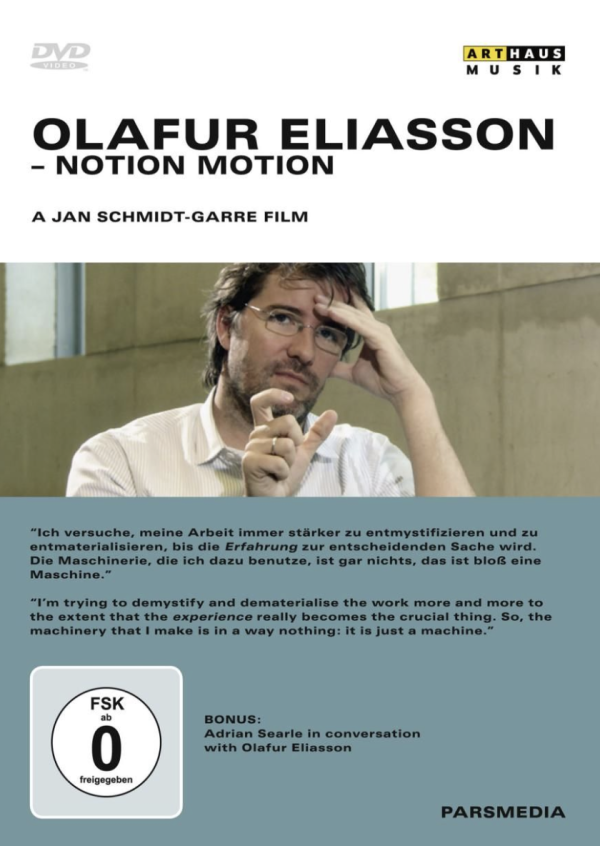 How does one best go about showing art in films? It seems easy enough. Whenever a piece of art is discussed it can be intercut, as a reproduction from a catalog or as originally shot footage. The most common procedure is an interview with the artist which is interrupted by images of his work. A second, subsidiary, level is created to illustrate the first.

Why do I refuse to use this convenient way of depicting art in “This Not That” and other films on art and music? Why do I prefer to show works of art in real situations – on a collector’s wall in a room in which something related is going on, at a dealer’s booth at an art fair while that person is being interviewed, or as a picture in a book the protagonist happens to be paging through at the moment?

One reason is that, ideally, every image in a film should have the same degree of importance. Just as Mies van der Rohe, at the onset of the modern era, called for architecture in which the idea of the whole permeated every single element and there was to be no distinction between functional and decorative components or just as Wagner called for musical structure in which all notes were equal and there was to be no distinction between melody and accompaniment, a director who knows his medium will not stand for solving problems in the editing room by cutting to inserts of hands, flower vases or pets, family albums, old buildings or – works of art. In this sense, a film that attempts to be a self-contained work of art should not have any images that are second rate.

But even more difficult than this dogmatic objection is the problem of aesthetic perception. A work of art that is used as an insert becomes evidence that is deciphered. As a moving image in a context, on the other hand, it is experienced. The collector is talking to the artist about his favorite painting and looks at it as he speaks. The film editing process takes that look and cuts to the painting. This simple cut from the beholder to what is being beheld is the essence of the magic of cinema: the audience enters the consciousness of the protagonist through his eyes – the window of the soul – and identifies with him by seeing what he sees, instead of passively being shown what is being talked about. The work of art the collector is looking at is integrated into the narrative flow, it becomes a part of the world of the film instead of just being an image that is made to fit in.

This technique often makes it harder for the director to show the pictures he wants to. Some of the points he wants to make may be less clear and the amount of factual information conveyed in films made this way may very well be less than in most conventional documentaries. As Lessing put it, the poet wants to enable others to “experience sensuous objects”. If the filmmaker succeeds in liberating works of art from their usual status as extras and restores them to their proper roles, they will continue to live on in the minds of the audience – and eventually change their lives.

The first thing that strikes me about your work is a word that is not often used for contemporary art these days: pleasure.

Sometimes the pleasure of a work can colonise its potential. I’d like to provide a key for the viewer’s engagement with the work. If something is very exciting it can provide a point of entry and can encourage people to become more involved with the work.

The pleasure lies in its complexity, similar to how a wave builds itself up and then confuses itself when it comes back at you... I was at the exhibition and there was someone walking about and they didn’t understand how it was all happening. They thought that there were things happening behind the scenes – whereas, in fact, you make everything visible.

It is very simple. And it is nothing new. All in all, it is almost nothing. The danger of entertainment is that it is disconnected from time and treats space as if it was a picture. I think the quality of good entertainment is where time is integrated into the experience. If I succeed in implementing the duration of an experience into the experience, then it has been successful and then pleasure is able to have consequences. This is what waves are. They are a consequence of the way you move through the space. Do you actively create the space or does the space create you?

Did you always believe in the social role of art?

At the beginning I wasn’t so sure, and it wasn’t always articulated in that way, but it was always there. Fundamentally, I was always interested in people, rather than in nature or science or whatever people would say about my work. It’s just like a robot. A robot is only interesting because it says something about us. This little Sony or Honda robot – if there were no people, a robot would be completely insignificant.

One aspect of your work is exactly the freedom of the spectator, who is not bound to stand in front of something, but can go to the side or behind and can examine the mechanisms by which things are being made. As you have said yourself “You are experiencing yourself experiencing.” Giving that freedom back to the spectator – that seems to me to be the lesson you want to impart.

I hope it is not too patronising, but I wouldn’t mind considering it a lesson. I hope there is something in this work that allows for more than just being taught. There are almost no places in society that support this idea of evaluating the nature of one’s own experience.
It is about the ability of really participating, but also about evaluating the structure of your participation and actually being critical. Who supports criticality? Who supports this kind of experiment? Nobody, because it is not profitable. Relationships are being commodified, and so is time and the body. Art has the precise ability to make a great statement and to evaluate the frame in which this statement is executed – as a part of the statement!

How are you resisting the globalisation of your art?

There is no escaping it. The institutional systems have become so powerful, that even trying to resist is hopeless. There is no outside of the institution; it is just one system. But we still have to introduce notions of responsibility to that argument. I’m trying to demystify and dematerialise the work more and more to the extent that the experience really becomes the crucial thing. So, the machinery that I make is in a way nothing: it is just a machine. But then this machine can travel around the world quite easily, and the experience will always be a different one.