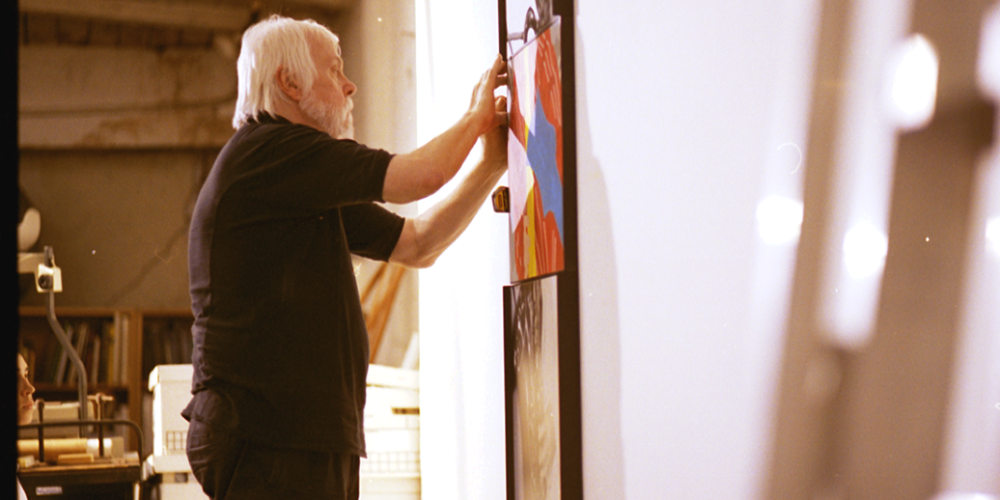 Films › This not That – The Artist John Baldessari

This not That – The Artist John Baldessari

John Baldessari (1931-2020) was born in National City, California. He was based in Santa Monica since 1970. Baldessari was one of the pioneers of conceptual art, which revolutionized contemporary art in the 1960s, and is still a profound influence on young artists today.

The film shows John Baldessari in all aspects of his work: as an artist in his studio, with the technicians he collaborates with, as a teacher interacting with his students, as a passionate observer of the contemporary scene and visiting the Biennale in Venice as well as the Basel Art Fair. The film provides us with insights into the work of a radically modern-thinking artist and sharpens our perception of the often inaccessible world of contemporary art.

Beginning with previously unreleased footage from his “Cremation” project and ending with his largest exhibition in the Deutsche Guggenheim in Berlin, the film spans an entire epoch of modern art history.

In co-production with ZDF/3sat, SF and Bel Canto Society

Supported by The Andy Warhol Foundation for the Visual Arts, The Broad Art Foundation and Deutsche Bank AG 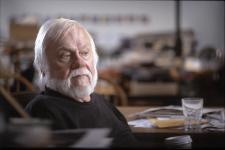 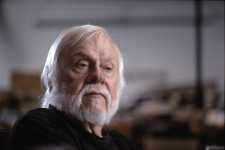 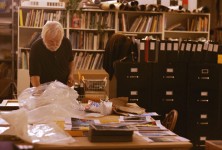 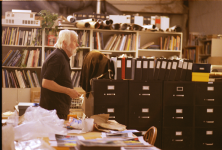 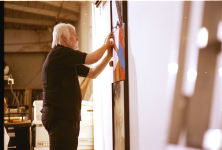 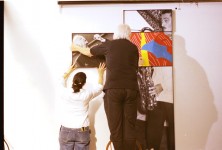 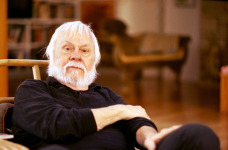 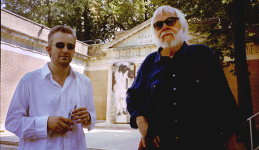 David Antin
"For something to be a cliché it has to have been true once. A cliché is like a pencil that once had a point and its point has been blunted by use to the extent to which it is no longer a useful writing instrument. But if it once was useful, then there is some possibility that you can recover it by placement of it in some odd position. That is, you can retrieve its meaning capabilities in some way. John works within a vein like that."

On DVD with PARS Media as a limited and numbered edition with many bonus features. Including a second DVD of three previously unpublished films by John Baldessari, signed by the artist (an edition of 120): 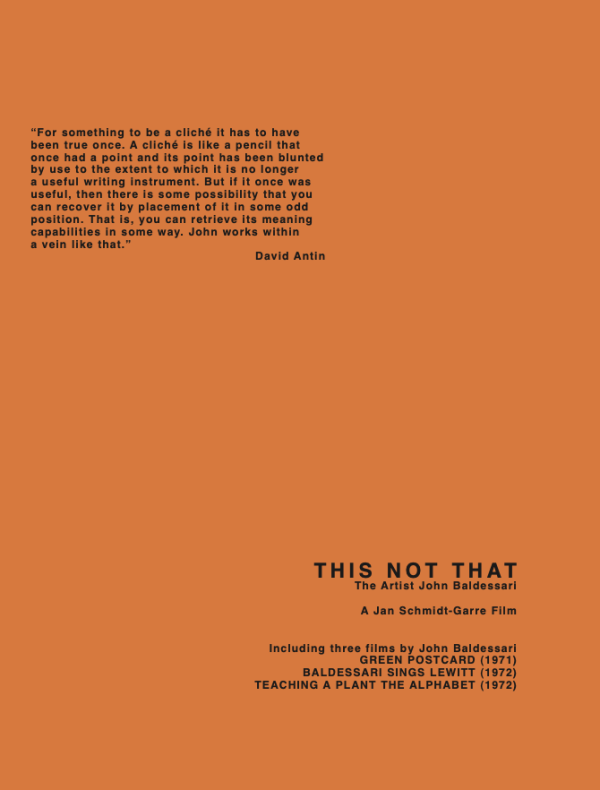 And on DVD as an unlimited edition including many bonus features with Arthaus Musik: 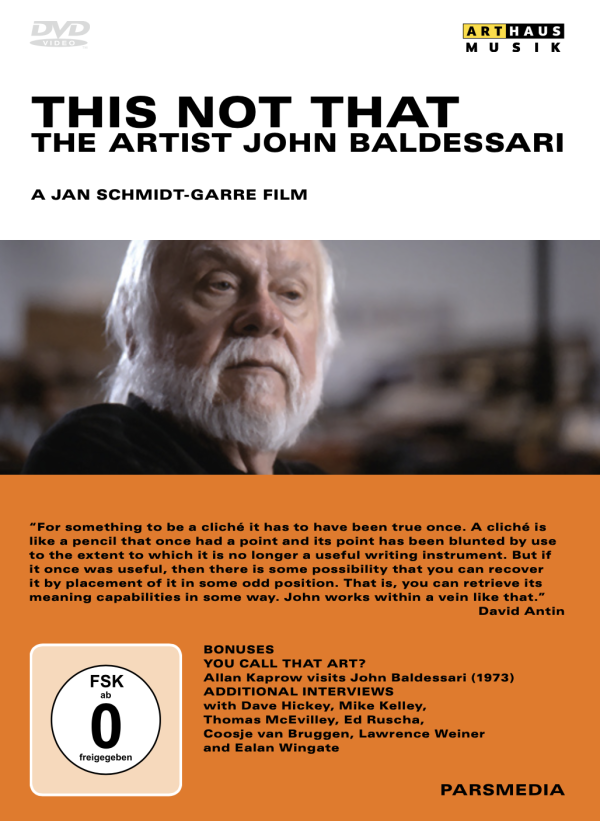 For something to be a cliché, it has to have been true once. A cliché is like a pencil that once had a point and its point has been blunted by use to the extent to which it is no longer a useful writing instrument. But if it once was useful, then there is some possibility that you can recover it by placement of it in some odd position. That is you can retrieve its meaning capabilities in some way. John works within a vein like that.

How does one best go about showing art in films? It seems easy enough. Whenever a piece of art is discussed it can be intercut, as a reproduction from a catalog or as originally shot footage. The most common procedure is an interview with the artist which is interrupted by images of his work. A second, subsidiary, level is created to illustrate the first.

Why do I refuse to use this convenient way of depicting art in “This Not That” and other films on art and music? Why do I prefer to show works of art in real situations – on a collector’s wall in a room in which something related is going on, at a dealer’s booth at an art fair while that person is being interviewed, or as a picture in a book the protagonist happens to be paging through at the moment?

One reason is that, ideally, every image in a film should have the same degree of importance. Just as Mies van der Rohe, at the onset of the modern era, called for architecture in which the idea of the whole permeated every single element and there was to be no distinction between functional and decorative components or just as Wagner called for musical structure in which all notes were equal and there was to be no distinction between melody and accompaniment, a director who knows his medium will not stand for solving problems in the editing room by cutting to inserts of hands, flower vases or pets, family albums, old buildings or – works of art. In this sense, a film that attempts to be a self-contained work of art should not have any images that are second rate.

But even more difficult than this dogmatic objection is the problem of aesthetic perception. A work of art that is used as an insert becomes evidence that is deciphered. As a moving image in a context, on the other hand, it is experienced. The collector is talking to the artist about his favorite painting and looks at it as he speaks. The film editing process takes that look and cuts to the painting. This simple cut from the beholder to what is being beheld is the essence of the magic of cinema: the audience enters the consciousness of the protagonist through his eyes – the window of the soul – and identifies with him by seeing what he sees, instead of passively being shown what is being talked about. The work of art the collector is looking at is integrated into the narrative flow, it becomes a part of the world of the film instead of just being an image that is made to fit in.

This technique often makes it harder for the director to show the pictures he wants to. Some of the points he wants to make may be less clear and the amount of factual information conveyed in films made this way may very well be less than in most conventional documentaries. As Lessing put it, the poet wants to enable others to “experience sensuous objects”. If the filmmaker succeeds in liberating works of art from their usual status as extras and restores them to their proper roles, they will continue to live on in the minds of the audience – and eventually change their lives.